The sweet part of Day of the Dead 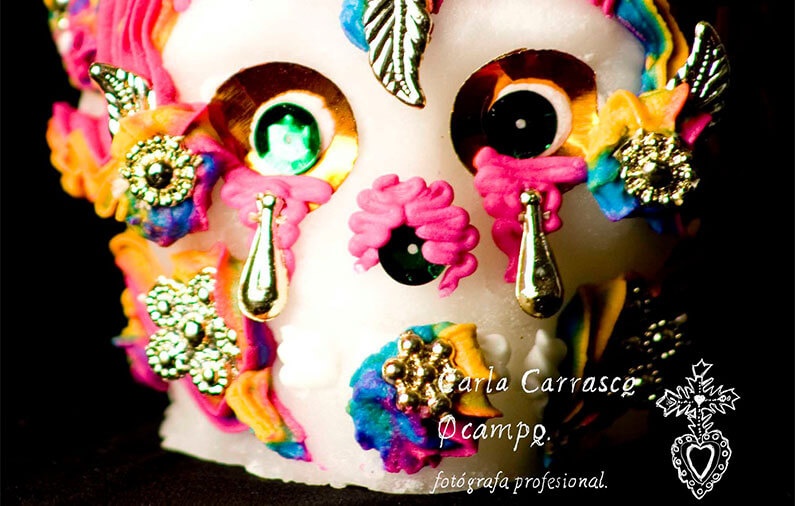 Day of the Dead is a wonderful and singular Mexican tradition that has marveled many but it has also stunned and confused many others by the fact that it turns all the sadness THE DEAD carries into a celebration full of color and joy.

Day of the Dead celebration in Mexico has been present since the pre- Hispanic era. However, just like many current traditions, this tradition has a fusion with the Spanish colonization, which replaced some of its original elements. Such is the case of the SUGAR SKULLS that appear now in the altars, one of the most outstanding icons of this tradition.

For the ancient Mesoamerica dwellers it was very common to make the called ” tzompantli”, altars made with hundreds of piled up craniums belonging to people who had been sacrificed to honor their gods, especially Mictlantecuhtli, their underworld god. With the arrival of the Spaniards and the colonization, these traditions were omitted and instead of setting up offerings with human craniums, the technique of “ALFEÑIQUE” was introduced.

The alfeñique is a kind of caramel made with pure sugar cane melted with hot water and lime to create a very malleable paste. With these paste are is made an ample variety of figures, the skulls among them. New ingredients have been added to the original recipe, so we can find sugar skulls made with amaranth or chocolate. Also, every state of Mexico has its own and particular way to do it.

Another interesting fact of the sugar skulls is that they are all given the name of a person that is placed on the forehead. There are two theories to explain this. One is that the name of the dead person who is honored has to be written, and there are those who think it is the name of a family member of friend, still alive, what must be written, as it will mean they will have a safe place in the life after death, according to ancient beliefs.

With these sugar skulls not only do we remember those gone before us, but also we keep our beautiful and peerless traditions alive. This Day of the Dead, do not hesitate to purchase them and help a local artisan still working the traditional alfeñique technique, especially in the states still running the original recipe: Guanajuato, Morelos and the State of México.