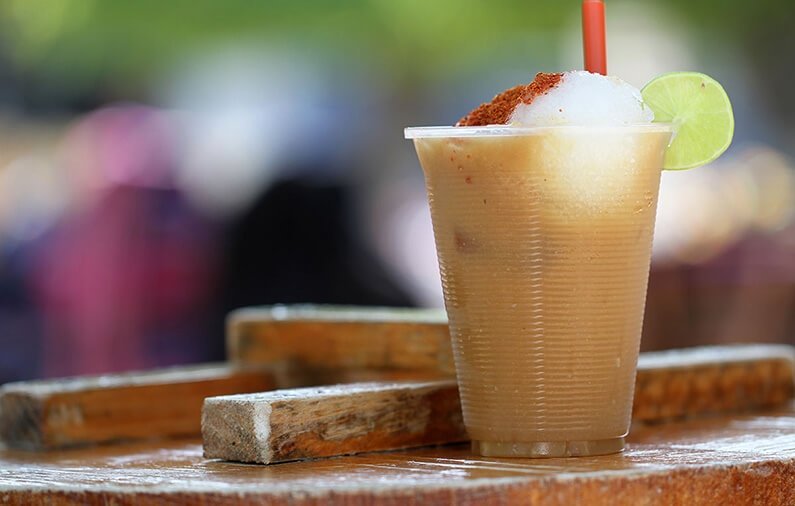 The Huicholes, an ethnic group originally from the Mexican states of Nayarit and Jalisco, are famous for their wonderful handicrafts and their particular traditions.

Part of the gifts this people originally called wirrarika has left to modern generations is the famed and succulent TEJUINO, beverage of their creation which was originally used for ceremonial purposes only, offered to their gods with the aim of keeping them appeased and being worth of their blessings.

The tesgüinadas ar festivities where colors, music, men, women, and children alike gather to adore Father Sun and Mother Moon, who in appreciation will send the miracle of rain to help grow the new corn cobs.

The base of this drink is of course corn, cooked corn or nixtamal which is sweetened with piloncillo or honey and fermented between three and five days. Nowadays it is served chilled adding chopped ice, salt and lime or lemon ice-cream, to become a very refreshing option.

The most modern version of tejuino is sold in the west part of Mexico, including the states of Nayarit and Jalisco. However, it is common to find it in San Luis Potosí, Durango, Sonora, Chihuahua, and some areas of Puebla. It is served in natural clay mugs to keep it fresh, but for practicality it is common to have it in disposable cups.

In medicine terms, tejuino has been subject to multiple lab tests which have found it to be a regenerator of intestine flora due to the high bacteria index found in it, a source of probiotic activity. It is also said that it is a miracle cure for hangover, as well as an excellent diuretic.

If you have the opportunity to taste TEJUINO, do not let it pass, and you will know what gods’ beverage tastes like.

Discover the boutique hotels we have in Puerto Vallarta and Nayarit area.